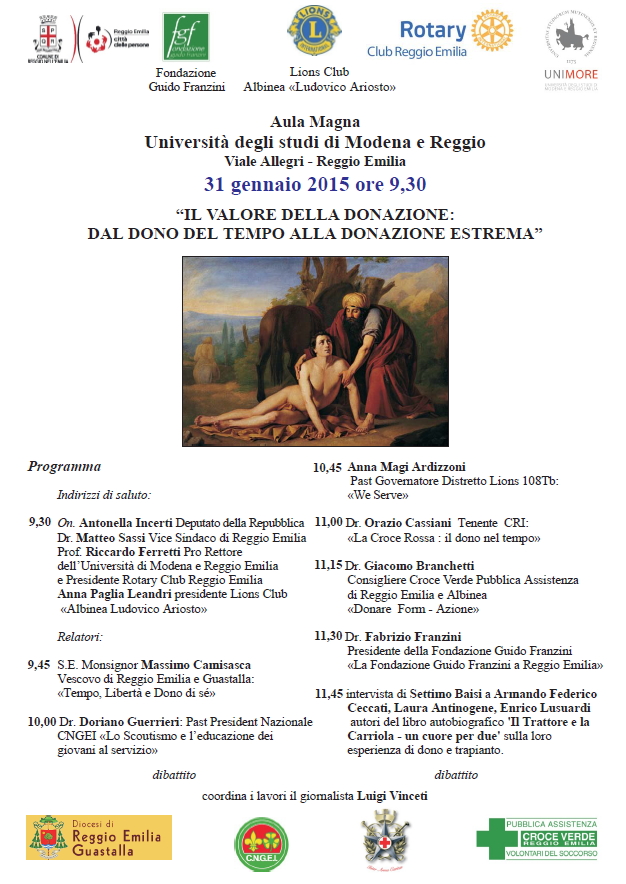 With the greetings of the President of the Lions Club Albinea “Ludovico Ariosto” Anna Paglia Leandri, the deputy mayor of Reggio Emilia Matteo Sassi and pro rector of the University of Modena and Reggio Emilia, as well as president of the local Rotary Club, Riccardo Ferretti opened today at the Aula Magna of the University of Reggio Emilia, the conference dedicated to explore the theme of the donation, understood as vocation to service and declined according to the secular vision and confessional.
Many young people in the room, including the guys from the Art School “Chierici” and the Higher Institute “Galvani-Lodi” of Reggio Emilia, which, in particular, had set up an information point of the project “We turn on the view”, supported Lions Club Albinea “Ludovico Ariosto” promoter of the conference together with the Foundation Guido Franzini Onlus, whose goal is to collect used eyeglasses that once regenerated, are donated to people in need.

The sequence of interventions, coordinated by journalist Luigi Vinceti, opened with a talk by Monsignor Massimo Camisasca, Bishop of Reggio Emilia and Guastalla, who, addressing in particular the boys, has proposed a deep reflection on the ability to think and to love of ‘man and woman’ faculties that allow us to open ourselves to others, which can help us and make us grow, even when they cause us suffering, because life is a gift, to be lived as a gift and is achieved by giving “Place it in
correlation with the concept of time “is understood in the deepest sense as the ability to combine the present, future and past,” introduced the concept of freedom, understood as freedom of choice “to open up to others, to a new dimension that enriches”.
In the year when we celebrate the centenary of the founding of the section Reggio, the past president of the National Italian scouts and explorers (CNGEI), Doriano Guerrieri, then recalled the principles that animate the youth movement spread globally based on volunteering and performs a valuable service to young people and community, because “scouting has an educational role and adults are at the service of young people in a free and disinterested – stressed Guerrieri – the gift, in this case, is not only for those who receive it, but also for those who do it. our first goal is to train men and women to become peacemakers, responsible, capable and motivated, because you learn from small to become great. ”
The second part of the conference was opened by the intervention of Anna Magi Ardizzoni, past governor of Lions District 108 Tb, who explained the concept of service shared by more than 1.3 million Lions working in 209 countries around the world . “The Lions motto ‘we need’ refers not to the mere charity, but in the forward-looking programming that allows you to understand the needs of the community to make them objective of service. Our roots – concluded Magi Ardizzoni – are rooted in communities where we operate and help to improve them by personal example.
“In a time of great difficulty as the current ones, discover common interests and the significance of the gift gives us humanity.” Horace Cassiani, coordinator for the Red Cross, so has introduced a rapid survey of the guiding principles of this extraordinary organization that acts internationally, while James Branchetti, representing Green Cross Public Assistance of Reggio Emilia and Albinea, explained the concept of volunteer training “intended not only as a theoretical and practical skills, but also awareness to the relationship with the people who are in a situation of need and difficulties” stressing “the importance, in such delicate moments of being able to grasp the need for relational people we deliver. ”

Clear example of vocation to service even the one illustrated by Dr. Fabrizio Franzini, president of the Foundation Guido Franzini, non-profit organization that since 2008 works in collaboration with Caritas of Reggio Emilia and Guastalla and the Center for Foreign Families of Reggio Emilia Ausl to give free health care to people destitute and without health coverage.

“Unfortunately, in Reggio are increasing the new poverty and, through the help of volunteer doctors and nurses of the Private Hospital Villa Verde, which has always played a work of completion and integration with public health, we propose the goal of help all these people in need – explained Dr. Franzini – Reggio Emilia is a city of excellence in health care thanks to the wealth of many voluntary institutions. ”
The last part of the conference has given way to emotion with the touching interview, conducted by journalist Settimo Baisi to Armando Federico Ceccati, Laura and Enrico Lusuardi, authors of the autobiographical book “The tractor and wheelbarrow. A heart for two”. A book to read in one breath that traces the path of Armando to a new life thanks to the heart donated by Federico Lusuardi, of which Laura and Henry are the parents, who died in a terrible car accident just 25 years old, along with his girlfriend Giulia Tomasi 21 years. Young lives cut, to which it was possible to make sense of extreme thanks to the donation of organs. Armando, the transplanted heart, chose to thank Federico making add his name “because if I am here today is because of him” and concluded the meeting by inviting all to be donors, according to their own time and their own possibilities and “if not want to donate to solidarity, donated at least for selfishness, because it is the only way to bring down the death. “