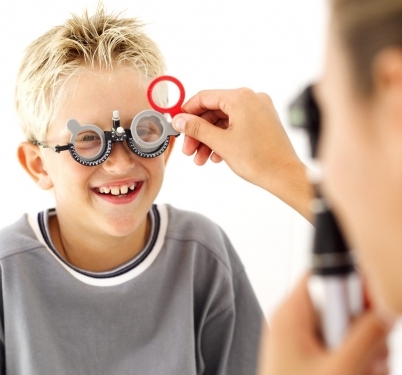 During pregnancy are formed all the anatomical structures of the visual system, this phase may be adversely affected by genetic factors that are hereditary or infectious diseases acquired from the mother who routinely are monitored during pregnancy.

After birth visual function is activated due to the fact that the two eyes see well. Visual function increases over time because the nerve cells connect to each other and with other areas of the brain that is developing. During this time, other factors such as the deviation of the eye called strabismus, visual defects such as astigmatism, myopia, hyperopia, can block the visual function.

This process is very lively at birth and ends at around eight years: that’s why any obstacle to the vision during this limited period of time, creates a visual impairment that when the child gets older is no longer recoverable. This condition is called lazy eye.

Dr. Pantaleoni, what the so-called amblyopia, or lazy eye?

The Amblyopia, also known as “lazy eye,” is that condition in which one eye is used more than the other and due to congenital and acquired conditions that we talked about, it must be recognized and treated promptly so that it resumes its function .

Lazy eye is not corrected only by growing.

According to the World Health Organization, is the leading cause of visual impairment in the world’s population, in poor countries as in the industrialized.

It ‘a well-known social problem because it often still is recognized when children are too old to stimulate and recuperate vision.

What are the symptoms and causes of a lazy eye?

The symptoms may be manifest. They are: the squint, the deviation of the eyes that can occur constantly or only at times, especially at night or after work; nystagmus, swinging rhythm, often horizontal, Eye; the leukocoria, the white pupil instead typically black, must be reported ophthalmologist because it can indicate the presence of intraocular diseases such as congenital cataract or vitreoretinal diseases for which generally requires surgery.

Much more often the symptoms occur as attitudes typical of any child how to approach the TV, read, write or draw at close range and with the head and body in bad postures.

Other symptoms such as lachrymation, photophobia (sensitivity to light of the sun) or rubbing eyes common to other conditions less problematic, may be due to refractive errors (nearsightedness, farsightedness, astigmatism) that are diagnosed and treated.

The symptoms may be entirely absent, especially if the disease involves only one eye.

What treatments are available?

Available therapies are: surgery, the use of glasses, contact lenses, selective stimulation of the lazy eye.

They are chosen and modulated according to the specific cause in order to remove the obstacle, realign the visual axis, correct the abnormal position of the head and neck, restoring a correct view of the images and retrieve the visual ability.

Very important is its first since early detection is recognized and treated, the better the results.

With parents, it is started the most suitable program for the child respecting and entering therapy among its habits in order to be more easily accepted and followed. The lazy eye does not recover by itself. Here at Villa Verde we work with orthoptists Michela Carluccio and Sara Chirivì and we are in contact with other professionals possibly useful to the case.

What are the tools to prevent this condition?

Sensitizing all on the argument: often parents, grandparents, family, school, teachers have the first suspect.

The evaluation of the pediatrician is very important too.

The introduction of screening of amblyopia which usually is realized around three years in kindergarten, has reduced the incidence.

The eye examination in children is the main tool for the prevention and tests using specific methods useful for the early diagnosis and therapeutic choice.

When subjecting children to eye examination?

Always, at any age, in all suspected cases and if there is a family history of eye disease.

No need to wait until the child knows how to read, nor that it is big enough to work.

We have the availability of tests and specific methods that allow us to understand the problem since infants are and regardless of their level of cooperation.

Early detection and the possibility to undertake therapy early is crucial to getting the best results.

Generally a first visit is made to all newborns, then after 6 months, then between 3-4 years and before coming to school. This timeframe is adapted to the individual case.

Today the use of the tablet, TV among children is increasingly popular, what are the implications?

Compared to the past, habits are rapidly. Our children are living in a lifestyle more sedentary and the use of PCs, smartphones and tablets in their free time begins at very early age.

The symptoms of eye strain are more frequent among children and adolescents caused by the use protracted of lens, , redness, dry eyes, soreness of the muscles of the neck and back due to bad postures.

The child needs a wide range of age-appropriate stress, because the brain is growing.

Some studies report that blue light emitted by some tv, video and led to smartphones and tablets, increases the production of free radicals resulting in stress and cell damage, fostered in children and adolescents by the transparency of the lens that favors the passage of a larger amount light radiation harmful.

Physical activity, movement, especially in the open air in addition to benefits on muscle tension and posture, promotes the production of dopamine, a neurotransmitter that regulates the transmission of images and counteracts the growth of the eyeball, which when excessive causes myopia.

What future activities of the Service of Ophthalmology at Villa Verde?

Besides the clinical and surgical activities, we organize periodic courses dedicated to ophthalmologists, orthoptists and optical care physicians and pediatricians.

Also this year in collaboration with the UIC of Reggio Emilia, we will organize open days of the free prevention for children and for the prevention of cataracts, macular degeneration and glaucoma in adults.

Continues, in the clinics of Villa Verde, the collection of glasses in disuse in collaboration with the Lions Club destined to poor countries.